Slots History: Get to Know When and How It All Began 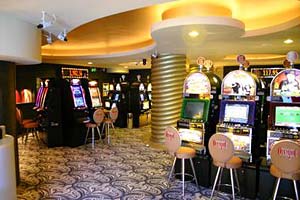 It was Charles Fey, a young engineer from San Francisco, who invented slots and it was due to his efforts that nowadays slot machines are so incredibly popular.  Fey devised his first slot in 1887, he himself placed his early machines in the gambling palaces of San Francisco, but it took him a decade to improve his invention.

The early slots were not as hideous as you might think; they resembled today's slot machines, including their size, but the symbols were not the same as today's regular symbols. In Fey's slots there were symbols showing the four suites of Diamonds, Clubs, Hearts, Spades, also symbols of a Star and Horseshoes were present on the reels. Fey's machine had three reels, which began to spin after a nickel was inserted. The original slots had a bell which rang when the right combination was achieved, but in later versions they were removed.

The first slot machines generation was called New Nickel Machines. They soon gained huge popularity among the population of San Francisco and Fey understood the potential of his invention.

In 1907 Fey joined forces with the Mills Novelty Company. The company used Fey's designs and manufactured the Mills Liberty Bell. Few years later a new version was introduced to the market, the Operator Bell, they weighted over 100 pounds, but they were extremely popular and more than 30,000 were made and distributed in the San Francisco area.

The machines then gained widespread popularity in Las Vegas in the late 1940s when Bugsy Siegel placed several hundred of them in his Flamingo Hilton with the original intention to entertain wives and girlfriends of high-rollers with their help. And today many high-rollers, both male and female, are Slot players.

One of the most appealing aspects of playing the slots is the fact that it isn't intimidating like most table games where you need some knowledge of the rules before you play. It's this basic simplicity that accounts for much of the success of slot machines in the casino. As a matter of fact, slot machines are the biggest money-maker for casinos, about 65% of the average casino's profits is being generated by this activity.

Slot machines were an instant success when they first appeared and their popularity only grows ever since. Today, there are more than 30 million slots players worldwide and slot machines are the most popular game in both online and offline casinos.

Back in the late 19th Century, the slot machines were considered revolutionary. But today’s online slotmachines are even more impressive. The latest video technology means online slots have a massive selection of games and themes and depth of game play that gives them a hi-tech edge over traditional slot machines.